Having the talk… about Catnip 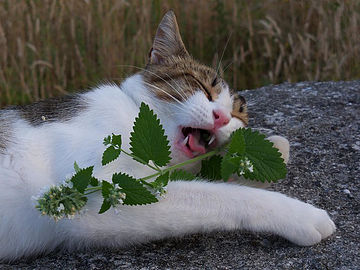 Catnip is a funny thing and is often called the ‘Feline Marijuana’ as it can cause them to jump, roll, play, and zone out in some cases. But what is it? What does it do? With marijuana becoming legalized shortly, is catnip next?

Catnip was never illegal, but it is an interesting plant. Felines of all sizes seem to love to play with it, and it often helps to calm cats down for short periods of time. Give it a try!

“The catnip plant (Nepeta cataria) contains various chemicals and oils which are volatile and released into the air. The plant and these chemicals are considered non-addictive and harmless to cats. The compound of interest in catnip is a volatile oil called Nepetalactone. When sniffed by cats, this chemical mimics a pheromone and triggers a sexual response or arousal. Behaviours often seen include salivation, jumping and rolling around, meowing, or rubbing up against the herb. The effects generally last approximately 10 minutes at a time, after which they become temporarily immune to catnip’s effects for about 30 minutes. Only 70-80% of cats will react to catnip in this manner. Catnip also only works on adult cats (6+ months of age) due to it requiring cats to be sexually mature to elicit such a behavioural response.”

(‘How Does Catnip Work Its Magic on Cats?’. Scientific American. Nature America, Inc. May 29, 2007. http://www.scientificamerican.com/article/experts-how-does-catnip-work-on-cats/. Visited 9/04/2018)